Thanks to the 900+ people who filled in the supporter survey, you can read about the responses below, and a few responses from me. In order of popularity:

It is clear that putting pressure on the councils is an essential step for better cycling in London. With the limited resources of this campaign we will only be able to target key councils, so I'd encourage any of our supporters who have a bit of time to get involved with a local cycling group - you can find your local LCC group here.

How could you support the campaign? 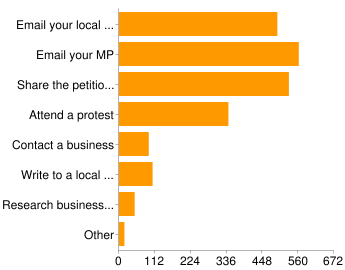 Again, in order of popularity:

More than half of our supporters want to get involved by directly contacting their elected representatives, which is great and we will definitely try to pick up on this with our future actions and highlighting the actions of other campaign groups. If you feel moved to write to your councillor, MP or local paper please share your letter with us and we will publish it here!

For the people who can attend protests we will continue to highlight the key protests in London. I've also noticed more groups around the country running protests so have a look online and follow people/pages about cycling in your area, there may be one near you (in the last couple of weeks there have been events in Tunbridge Wells & Bristol).

Suggestions for 'What should we campaign on in 2015'?

Reviewing the 'other' responses there are some themes mentioned several times:
I also wanted to specifically respond to a comment about the campaign:


Broaden campaign nationwide There are millions of cyclists (including kids!) outside of London facing identical problems which are not limited to London commuters yet local authority indifference & apathy is stifling change

This is so true, unfortunately our campaign resources are very limited and we're not able to fill that role. I would strongly encourage supporters of this petition around the country to get involved in the existing local and national campaigns for better conditions for cycling, or to start their own. You can find campaigns near you via http://www.cyclenation.org.uk/groups, social media and twitter can also be a really good way to stay in contact with what's happening near you.

We also encourage people to engage with other related campaigns which are making the roads safer for all of us.

There were many suggestions and a selection are listed below. There are some really moving stories below unfortunately we can't respond to these individually, but have highlighted some of the messages. Note that publishing these messages does not mean I agree with all of them, a few have been edited out as they are clearly at odds with the aims of the campaign.


Other responses for "how could you support the campaign?"

Email ThisBlogThis!Share to TwitterShare to FacebookShare to Pinterest
Labels: survey